Did you know metric is the preferred system for all U.S. agencies, and required for interactions with commerce?

I feel fortunate that my employer is based in Australia. It’s continued to push me to re-evaluate my ethnocentric views of measure.

It started during a recent converation in our “Makers” channel discussing where and when we see imperial and metric measures used, some of them left the question there for us “Is the US really that averse to metric? Don’t they sometimes use both types of measures?”

Turns out the United States is already a “metric nation” and has been since 1880’s or 1970’s depending on your interpretation.

So if the U.S. Government is metric, why isn’t the nation?

So read on to see how our household is moving forward!

Because many American’s, like my peers abroad did not even know Metric was a thing in the U.S.

OK, my 2021 take was cynical I suppose, here’s a more legitimate summary from USMA: 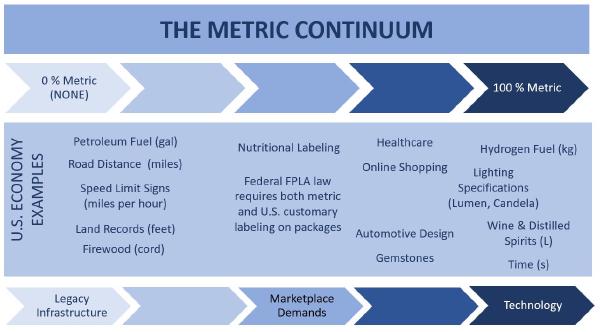 Ok, so as we know U.S. Congress is inept, and will never pass any law that slightly inconviences industry. So to push from the other side this U.S. Family is taking it upon ourselves to learn, adopt, and evangalize SI - the international system of measure!

To that end I’m making a marked effort to standardize on metric in our home with the support of my wife and children.

Ok, I’m not sure about the last one, obviously there will be some real friction as we adopt what is still largely unacknowledged. Below are some hopefully more practical steps we’ll take.

If you’re looking to jump-start your adoption of metric and standard measures, I am including some found and created resources to help my family see, size, estimate, write and speak in metric measures!

But our measure makes American unique!

I mean, yeah but…

Anyway, more importantly it is not American! It’s Imperial, as in British Imperial. The measures of our very nemesis we threw off to found this nation. (Love you now, just making apoint here! )

It’s probably for those reasons early fore fathers tried to convert to metric before the country grew larger.

Plus accepting standard measures is better for consumers and industry alike in the long term as more products standardize and expand markets.

The easiest way to expose in our daily lives. 25F is a cold winter day, but 25C is a great day for the beach. Encourage your family to convert F to C wherever you see it. (bank signs, smart phones, news reports, etc)

We’re not treating this as “conversion” but just a high level mapping. Not getting specifically accurate, but generally close (cold, warm, hot).

I didn’t want to start with conversions because my children 3 & 5 are too young for quick maths, and ideally young enough to just start with metric as their baseline.

TIP: Set your home assistants (Google, Alexa, Apple) to use Celsius instead of Fahrenheit.

How much does that car weigh? How long is that bridge? How much milk in your cup? Use everyday objects to discuss estimating size in metric.

TIP: nist.gov has a great “everyday estimations” page. Have your children draw each of the objects as you talk about the measure. Hang the results as a handy chart!

NIST has an entire site dedicsted to Metric measures and adopttion, including videos, reading materials and even experiments.

The USMA advocates completion of the ongoing US conversion to the metric system, officially known as the International System of Units (SI).

Some sources I used…